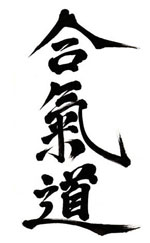 The aim of the exercise is not an empty perfection of movements and techniques that will hurt and defeat other people. On the contrary, the true goal of martial arts training is the human spirit and create a person who lives in harmony with others, welcoming them in a peaceful manner, striving to create harmony between himself and the rest of the world.

This is achieved through exercise, without competition and conflict with others, and without the use of brutal force. Aikido is not just about physical exercise, but also spiritual development, while learning proper ethics and behavior.

Founder skills, O-Sensei Morihei Ueshiba after he had mastered many traditional martial arts (ju jutsu, kenjutsu, sojutsu etc.), created aikido as a skill that will not destroy, but to contribute to a better understanding and connecting people around the world.

The technical development of aikido summed up the experience of traditional martialsystem, especially Daito–ryu Aiki–ju-jutsu style. Besides the technical aspects, aikidoand its philosophical, spiritual interpretation, follows a natural, all-encompassingmovement of the universe.

In all interpretations of aikido, there are two basic ideas:
• the peaceful resolution of conflict whenever possible
• personal development through aikido training

Aikido is non–resistance. Because it is non-resistance, victorious from the beginning.Those with evil intentions or evil thoughts are currently defeated. Aikido is invinciblebecause with no way collision.

A true warrior is invincible because they are not competing against anyone. Defeatmeans to defeat the mind of contention that we foster in ourselves.

Hurt rivals mean to hurt himself. Control aggression without inflicting injury is the real art of Aikido. Techniques used four qualities that reflect the nature of our world.Depending on the circumstances, would have to be: hard as a diamond, flexible as awillow, smooth liquid like water and empty as empty space.

You can find out more about which cookies we are using or switch them off in settings.

This website uses cookies so that we can provide you with the best user experience possible. Cookie information is stored in your browser and performs functions such as recognising you when you return to our website and helping our team to understand which sections of the website you find most interesting and useful.

You can adjust all of your cookie settings by navigating the tabs on the left hand side.

Strictly Necessary Cookie should be enabled at all times so that we can save your preferences for cookie settings.

If you disable this cookie, we will not be able to save your preferences. This means that every time you visit this website you will need to enable or disable cookies again.